Why We Should Eat More Bugs

Eating Insects is the Future

In this video created by BuzzFeed titled, “Why We should Eat More Bugs,” individuals are exposed to eating bugs for the first time.  Around the world there are over a thousand different types of edible bugs ranging from scorpians, crickets, mealworms, and more.  The act of eating insects is called entomophpagy and around 2 billion people around the world are eating insects as food.  Eating insects can take the form of whole insects, cricket flour or other insect flours, or combinations of different types of flour and insect flour.

Currently, the FDA allows acceptable levels of bugs in everyday foods such as peanut butter, fruit juices and chocolate.  However, eating insects alone provides a great source of protein, fiber, and other nutrients such as iron and zinc.  Although so many people worldwide are eating insects as food, it is only just catching on in the United States.  However, they are currently eating other anthropods such as shrimp, crab, and lobster.

Only time will tell if eating insects will become as popular as other species such as lobster, but as the world’s population continues to grow, eating insects and using insects as food will continue to become a cheap sustainable food source for the future. 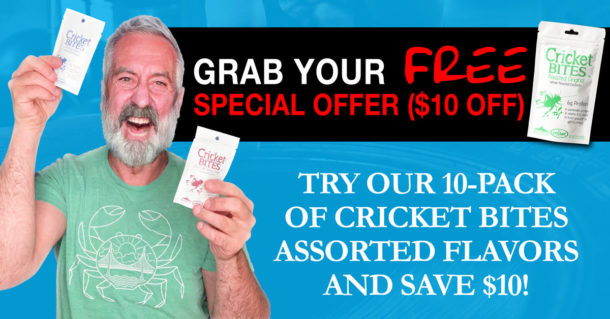 Thank you for joining our Cricket Club Newsletter! Make sure to check your provided email to confirm your subscription to also access our digital download of 25+ edible insect recipes.